Recently the following was posted to a Facebook page for customer reviews of local businesses where I live. 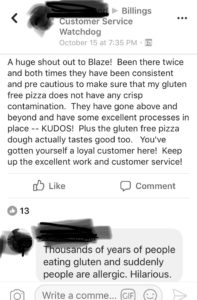 You brought up a great point on your Facebook comment, “Thousands of years of people eating gluten and suddenly people are allergic.”

Maybe we should be asking the question why is there such an allergy spike and what can be done about it??

*The Centers for Disease Control and Prevention reports food allergy in children increased by 50 percent between 1997 and 2011.

*Childhood hospitalizations for food allergies tripled between the late 1990s and the mid 2000s.  YEEKS! That is downright scary!

*Researchers estimate that up to 15 million Americans have food allergies, including 5.9 million children under age 18. That’s 1 in 13 children, or roughly two in every public school classroom.

*About 30 percent of children with food allergies are allergic to more than one food.

*Every three minutes, a food allergy reaction sends someone to the emergency room, the majority being children.

So Mr. Hilarious, what has happened to cause such a dramatic spike, and is it really as hilarious as you commented?

Let’s start with farming. The way our crops are grown and processed has changed. For example, wheat itself has changed, and vital nutrients have been stripped from it. It is not the same wheat seed from “thousands” of years ago. Farm growing and processing has been “revolutionized.”

For instance, in the 1950s the “Green Revolution” hit. Norman Borlaug was even awarded the Nobel Peace Prize for fathering the movement. Borlaug helped develop high-yielding varieties of cereal grains, distribution of hybridized seeds, synthetic fertilizers, and pesticides to farmers.

…and don’t forget about genetically modifying not just farm crops, but fruits such as apples and papayas.

Let’s not pick on our industrial way of farming, though. Maybe it’s that we keep our kids so clean their immune systems are weak. It could be their genetics. Maybe the spike is because of vaccinations. Or, maybe it’s linked to the rise in childhood obesity.

Either way…as a parent in the thick of navigating food allergies for my kids and myself, I can say I don’t know why I had allergic reactions to milk as an infant and then gluten later in life. I don’t know why my kids have. But we do and millions of other kids and adults do, too.

So what can we do about food allergies? Well, Mr. Hilarious, we can be supportive of those who have them. A 2014 study found that as many as 32 percent of children with food allergies have been bullied at least once. I know my kids have been. They hear tauntings like, “Haaa haaa you can’t eat this and I can,” as a candy bar is dangled in their faces.

So try leaving a positive comment next time or not commenting at all.

Some reading this who don’t have food allergies may be thinking to themselves, “I have friends who say they have allergies, but I see them eating food they shouldn’t” … yada yada yada.

Maybe you’ve experienced this, Mr. Hilarious? Yes, it happens, but let’s not mistake those for all.

Did you know kids and adults die from food allergies? I don’t find that hilarious at all. Approximately 100 Americans, many of whom are children, die annually from food-induced anaphylaxis according to the NIAID.

Google the name Natalie Giorgi. See how hilarious her parents think food allergies are. They buried their sweet daughter when she was 13 from a food allergy incident.

Simply put, let’s be supportive even if it’s just with our words.

Now, let’s examine the common sense side of this, too. The original Facebook poster’s credibility was called into question for having food allergies. Are you suggesting she’s lying or attention seeking? I can tell you it is a ton of work to eat allergen free.

And there is no glitz or glamour to it.

I really doubt if the poster enjoys eating a special diet and being limited to what restaurants she can safely eat at. I doubt she enjoyed spending extra money for a gluten-free crust with her meal. Did you know gluten-free pizza crusts are typically $2-3 dollars more at restaurants than the same size pizza you order? Last time I checked I didn’t see anyone lined up at a restaurant asking to add $2-3 extra to their bill.

Again let’s try supporting those around us instead of offering rude comments or back-handed insults.

The poster wasn’t asking for opinions on whether food allergies are real or not. She was simply doing what the Facebook page was created for…to leave a business review.

While researchers continue to look for solutions to this challenging and even tragic health problem I will keep praying for the health of my family and so many others.

For the future, I’d suggest you be supportive and “keep scrolling by.”

Have any of you posted or made comments on social media to have this happen to you? I see it way too much. My heart goes out to those who have experienced this. Please share your experience in the comments and let’s support one another.